As part of MariGroup, the maker of vacuum delivery systems, MariElectronics has come up with two novel ideas that increase passenger safety onboard.

The first one is an advanced evacuation system that shows passengers the safest route to muster stations or another secure place in case of hazard or fire, where smoke is reducing visibility. Mils® is described by the company's COO Jari Ekblad as being the "best on the market solution based on LED technology. It is easy to install and needs almost no maintenance, which are critical factors for cruise ship companies, as time is money."

Mils® comes with several options. The most common on the market is static, where the statuatory green lights are lit simultaneously. "Our advanced system guides evacuees by dynamically pointing them in the right direction, which our software will indicate to the safest area as it has built-in, pre-planned evacuation routes and scenarios. Both can also be equipped with emergency lighting in the stripe."

So not only new ships can be outfitted but retrofits too, as it is a simple procedure of fitting the lights into the floor or skirting boards - the lowest point as smoke billows down from top to bottom. "The static system fulfills current regulations. Our dynamic version also exceeds those and is clearly ideal for people to find their way around a ship in a bad visibility solution," comments Ekblad.

Elsi® is a sensored floor that knows where people are and their movements.

"For marine applications, we are promoting it in cabins as an extra monitoring safety feature - as an option that can be turned on, if ordered. The cabin occupant(s) then get a 24/7 nurse who knows if a passenger has fallen and does not get up, as it raises the alarm to friends, relatives or medical staff after no movement is detected after a time period."

Inside shower and toilet areas, an optical sensor is used similarly if occupation goes over a certain length of time. And it may be so programmed if the occupant has stayed in bed for too long and not touched the floor. Mils® and Elsi® can work together to assist evacuations if, during an emergency, movement is detected in cabins; then help can be sent. Around muster stations, Elsi® can indicate the traffic in corridors. Equally, it can be a security application detecting people in areas where they should not be.

Lastly, there is a helpful potential for elevator makers and users; Floor areas around elevators can optimize flow and energy-use by determening how many await and if capacity is insufficient. Then elevators will not stop, but return when they can take all those waiting. Ekblad hints that elevator makers are indeed interested in sharing this information. 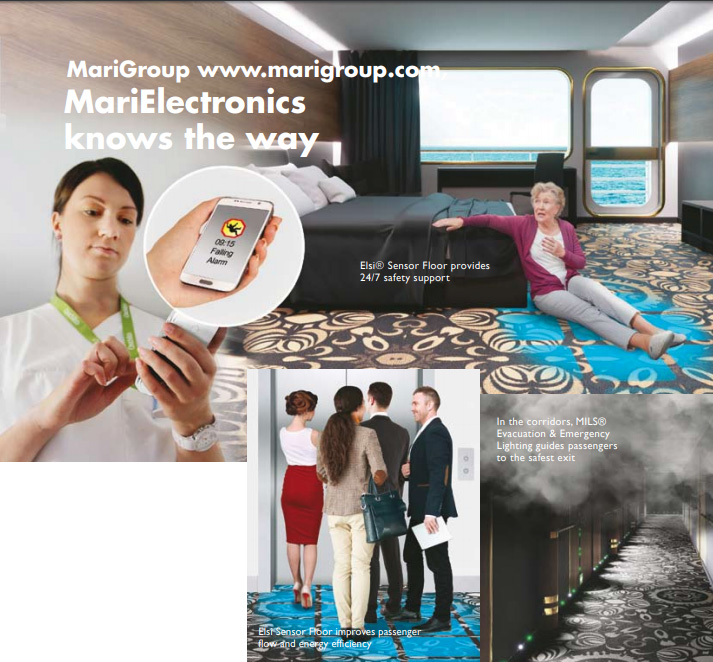